The cakes have just come out of the oven as I begin typing up this post.  I penciled in my notes on pp 58-60 in RHC… noting that I forgot to add two whole eggs to the egg yolk mixture — I noticed them in the little dish beside the mixer after the two cakes were baking in the oven — ooops.  And I noted the special order of cake preparation — as a reminder to myself that this cake is prepare in three parts – the almond cream filling, the sliced pears and the cake batter.

I often wonder if it’s wise to make double recipes for cakes I’m trying — unless the recipe is terribly decadent – read: expensive!  In that case, I’ll likely just make a single recipe and serve smaller portions to our family.  Though most are quite average, some of the recipes in Rose’s Heavenly Cakes are quite expensive when the cost of the ingredients is added up.  I have been buying ingredients along the way with money I’ve recieved from the baking of other cakes – wedding cakes, mostly.  I’ve sort of become discouraged by the strict state regulations for baking and catering businesses.  So… I just bake for friends and by referral on a donation basis.  I know this isn’t the wisest method to build a business or isn’t a very profitable business plan, but if we’ve learned nothing else in this life, my husband and I sure know it’s the Lord who provides for us — for our every need and has never failed us.  Ever.

But I digress.  Here’s the Swedish Pear and Almond Cream Cake…

So, I went to Top Foods and bought a can of almond paste… turns out I only needed one half of the can (good thing!), so I will search another recipe in the book that will require almond paste and I’ll use it for the cake I make on Monday.  If I don’t find a recipe, I’ll resort to baking an almond bread braid (our family will not object ~wink~).

I weighed the amount of almond paste called for in the recipe.  That’s one of the greatest assets of the RHC cookbook — not only are the recipe ingredients listed in measuring units, but also the required weight or volume is listed for each ingredient.  This makes for much more accurate measuring and baking.  I should have weighed the eggs, for example, for the Chocolate Butter cake.  I will next time. 🙂

I made the Almond Cream Filling and set it aside; I thinly sliced the pears and drizzled lemon juice over each slice and also set them aside.  I mixed the dry ingredients and added the sugar and the butter and sour cream — it was quite thick — but the slowly added egg mixture made the batter very smooth.  Rose recommended scraping the sides at 30 second intervals – I did it sooner than that. 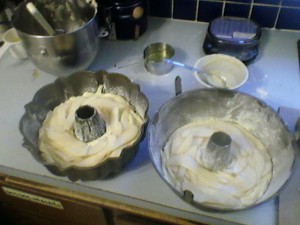 After dividing the batter into the two pans (remember, I had doubled the whole recipe), I smoothed it out and made the shallow well or depression in the center of the batter all the way around the pan.  This allowed for the Almond Cream filling to have a definite place in the batter so that it wouldn’t touch the pan sides.  Then I arranged the thinly sliced pears evenly around the top of the batter/filling and then repeated another thin layer of pears all around.    I baked them for 55 minutes.  It was the perfect time / half way between the 50-60 minute suggested baking time. 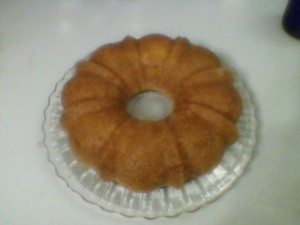 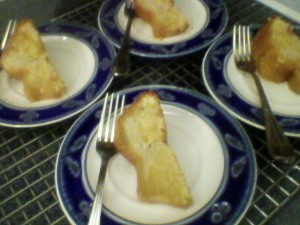 I suspect missing two of the whole eggs had something to do with the more flat appearance of the cake — but after it had cooled and was served, everyone had a slice and thought it tasted delicious.    The pears were enveloped into the middle of the batter as the cake bake and stayed ‘sliced’ looking even after baking.  I hope you’ll try this recipe.   I definitely will bake this one again — I will use a smaller tube pan and I might raise the heat by ten degrees.