I knew there’d be posts like this.  I just hoped they wouldn’t happen often.  Or this soon.  I’d gotten the kitchen all cleaned up from the cake debacle and I was content with the now cool cake and so it was time to proceed with preparing the frosting.

Do not overcook the golden syrup/sugar/lemon juice in the saucepan.  It will become hardcrack candy impossible to use.  And you will have to soak the pot, the spatula, the whisk and anything else that came in contact with the would-have-been syrup. 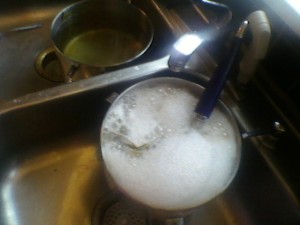 But if you do overcook the syrup, fret not thyself!  You’ll sigh a sigh of relief that you hadn’t used (and wasted) the $3. a pound block of butter.  And, if you’re enthusiastic, as I am, you will just say, as I did: Ooops. 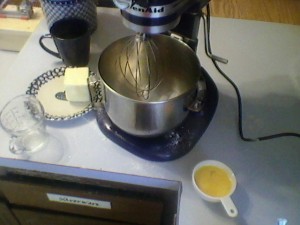 I then added the syrup (properly done, this time) to the yolks.  Since I have made French and Italian buttercream before, I knew that I needed to carefully pour a thin stream of the hot syrup into the mixer — taking extreme care to not hit the mixer-whip and fling the syrup to the side of the mixing bowl.

After that cooled, I mixed in tablespoon by tablespoon, the butter until the Neoclassic Buttercream was perfect:  Heavenly.  Well, at least that’s what I think Rose might have said. 😉