This one’s from The Cake Bible, p. 46-47.  I wanted to make a special cake for a couple of girlfriends who have birthdays this time of year.  I wanted it to be light, not too sweet and not too strong in flavour.  So… browsing  TCB I remembered a cake I’d made a couple of times before — but not for this cake journey — so that’s the one I chose — the White Velvet Butter Cake.

I think it’s a bit dry – very light and tender, but a bit dry.  It’s a white cake – except for the insignificant colouring from the butter and vanilla.  I think I’d add a tad more butter next time.   But I think it baked up beautifully — and when I asked my daughters how they liked it, they thought it tasted good.    Still… ISO… the perfect cake.

To frost it, I knew I needed something that wouldn’t be too overpowering for the simple cake – so I decided to make the Mousseline Buttercream (TCB p. 244-245). 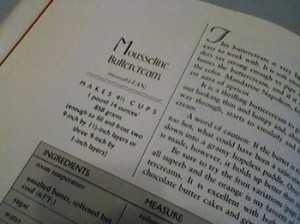 I’m pretty sure Mousseline Buttercream could be just the right thing for anything… as a spread for muffins, toast, crackers or fingers.  It’s smooth as silk, buttery and soft.  And yet! I used it to pipe the edges and base and to make the little dots after I used it to frost the Raspberry filled cake.  I don’t know if I like it as much as the other buttercreams, but it’s very nice!

The funniest part of making buttercream is the almost suspenseful process!  You make the syrup and add it to the stiffly beaten lightly sugared egg whites and then when it’s cooled, by continually beating, you add butter by the pound tablespoonful.  You continue to add butter — even though you might feel just certain the process is failing and you’re wasting a pound of butter.  It’s not until you get three fourths of the way through that you finally see some marvelous progress!  At this point, it really does seem as Rose says… (even though my heart is beating faster at the suspenseful process) the frosting is finally a “luxurious cream.”

It was delightful to stack the cake (filled with raspberry filling) and frost it with this marvelous dreamy frosting – piped the edges and added flowers.  I decided not to pipe the roses, but to make them from fondant — which I love doing! 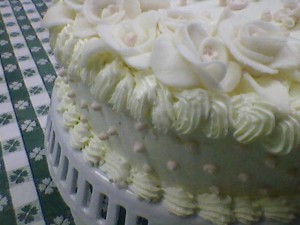